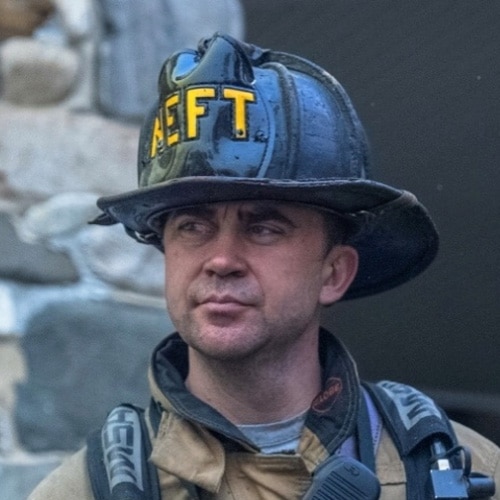 Chris is the founder of New England Fire Training located in the north east United States.  NEFT began in 2016 and is changing the way firefighters stay proficient in their interior firefighting skills by integrating its philosophy and skills program with its one-of-a- kind training props.  Chris has designed and built two interior training props that are unlike any other training tool on the market.  NEFT uses the realistically designed forcible entry door and incorporates it into the “hogwall” training system to provide firefighters a unique and dynamic training experience.  Using these proprietary firefighter training props NEFT conducts its proficiency programs and teaches its philosophy by giving firefighters an “arena to be great in”.

Chris started New England Fire Training with the idea that every firefighter needs the chance to learn and become proficient in their skills in an environment of freedom so they feel confident to complete the mission that matters most in the fire service, the mission to save lives.  At NEFT we believe that repetition creates skill, skill breeds confidence and confidence saves lives.

Chris is a Lieutenant in Manchester, New Hampshire; an old New England mill town that was once the center of the world for textile manufacturing and is currently the largest northern New England city at a population of roughly 115,000. Chris is assigned to Engine Company 9 on Calef Rd which was established  in 1894.  Prior to being promoted to Lieutenant, Chris was a firefighter at Engine and Truck 7 on Somerville St for 16 years.

Save big with Early Bird Registration

Get notified when the Early Bird deal goes live!