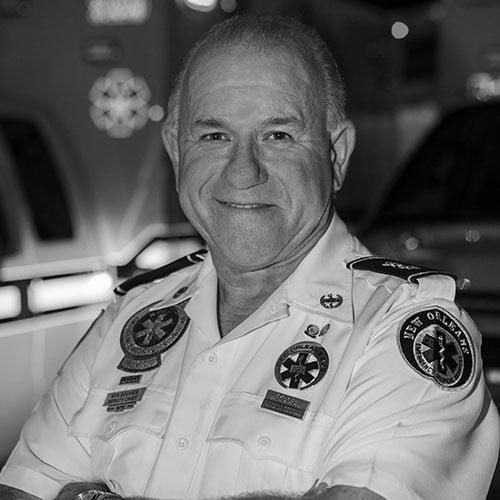 Chief Bouvier is a Nationally Registered Paramedic, known nationally and internationally as a professional EMS speaker.

He began his Fire & EMS career as a volunteer firefighter.  He was hired by Monsanto in 1975 where he served as a career industrial firefighter.  In 1982 he was promoted to Monsanto Fire Chief & Gobal Hazardous Materials Team Leader until he retired in 2012 after serving 37 years.

While working at Monsanto, he also worked part-time for New Orleans EMS as an EMT / Paramedic. After retirement from Monsanto in 2012 he began working full-time at New Orleans EMS as the Deputy Chief of Operations where he served until he retired in March of 2019.

Chief Bouvier while working at New Orleans EMS served as the commander of most New Orleans major events including Mardi Gras, Super Bowls 2002 & 2010 and Hurricane Katrina.

Chief Bouvier served as President of the National Association of Emergency Medical Technicians from 2004 – 2006. He is a Life Member of the Westwego Fire Department, Louisiana Firemens Association, NAEMT and is an Honorary Member of the Arkansas & Delaware EMT Associations.

Chief Bouvier has an extensive educational background in both Fire and EMS and has made written contributions in 13 EMS textbooks.  He presently serves on the EMS World Editorial Advisory Board since 1998.